“Pulling Back the Curtain” : Analyzing and Voicing the Identities of Characters in Shakespeare’s Twelfth Night 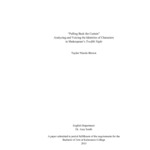 Shakespeare was known for his ability to adapt and change other works, or blend his own works, like his sonnets, into other portions of his literature such as his plays. Shakespeare’s ability to also adapt his characters, by drawing parallels between them while not conflating them, inspired me to explore his characters. In Twelfth Night, Shakespeare uses the traditional “comic” form of playwrights; however, he also uses an undercutting of tragedy to provoke questioning and unsettledness from the audience. The idea of questioning Shakespeare also incorporates within the characters of Twelfth Night themselves: Viola is disguised as Cesario, Feste plays a happy jester while actually a sad fool, Olivia veils herself from men while desperately seeking love and so on. Viola and her twin brother, Sebastian are confused for one another, and their true identities being revealed is what ultimately resolves the primary conflict of the play: identity. The author explores the problems of identity and duality in Shakespeare’s play in both essays and poems from the point of view of Olivia, Viola, Malvolio, Orsino and Feste.