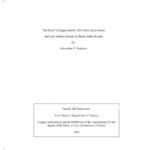 This Senior Individualized Project is made up of three distinct parts: a personal reflection of the author’s journey to becoming a Classics major and experiences in the 2013 Excavations in Stobi, Macedonia, a stratigraphic report of our findings, and an in-depth research analysis of the in-house infant burials found during the 2013 excavation season. Stobi was occupied for a period of about 800 years, beginning in the second century BCE. Under Emperor Vespasian's rule (69-79 CE), the city was granted municipium status and the right to mint its own coins. Stobi has an important Christian history, hosting the oldest Christian church in Macedonia (fourth century) and one of the city's bishops attended the council of Nicaea in 325 CE. This site has been under excavation since the early 1920s, when some of the ruins were discovered by German officers in WWI. The 2013 excavation group worked in two adjacent sixth century CE buildings in Stobi's western residential area. In the course of the excavation and subsequent research, it was determined that the two buildings were houses in use up until the city's abandonment in 587 CE. Under the floors of both buildings, three infant burials were uncovered. The graves were cut at the same level as other storage pits, determining that the graves were contemporary with the inhabitants of the houses. Other examples of in-house infant burials have been found around the Mediterranean, creating a tradition of such burials that can be distinguished from any religious beliefs or customs. The mortality rate of children under the Roman Empire was catastrophic, so infants were considered an entirely different species that required wholly separate burial customs and locations. These three infants most likely died in childbirth or directly after and were buried under the floors in order to insure some sort of rebirth or peace of the spirit.