Douglas MacArthur : The Lion of Inchon 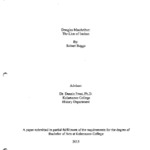 Although there were a multitude of problems that faced the Inchon Landing, MacArthur was still able to make Operation Chromite a reality. While planning for Inchon, MacArthur faced geographic, political, and logistical problems. MacArthur was always confident in his plan and managed the geographic problems at Inchon, convinced the JCS to allow him to land at Inchon, and was eventually given the necessary troop support that he needed. MacArthur was the only one who believed that these obstacles could be overcome. The personality of MacArthur is important to understanding how the Korean War was fought. Since MacArthur was the commander of American forces for most of the war, getting inside of his head can shed new insights on how the Korean War is viewed in history. This battle also set the stage for MacArthur doing as he pleased in Korea, something that eventually led to him being relieved of command and replaced by Ridgway. Shedding new light on Operation Chromite could help to increase awareness of the subject. The Korean War is often referred to as the "Forgotten War," so many people today are not aware of what Operation Chromite was and how important it was during the Korean War. This study can help increase the awareness of a forgotten battle that occurred during a forgotten war.