The Protein Phosphatase Glc7 Differentially Interacts with Septins During Sporulation 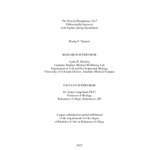 The septins are a family of highly conserved cytoskeletal proteins that play many important roles in cells. Septins act as scaffolds through the formation of a membrane diffusion barrier that are centers for activation and recruitment of proteins to their target sites. In the budding yeast Saccharomyces cerevisiae, there are five mitotic septins: Cdc3, Cdc10, Cdc11, Cdc12, and Shs1, and two sporulation-specific septins: Spr3 and Spr28. Sporulation, a meiotic process, is induced when yeast cells are under environmental stress. Each haploid yeast cell then becomes encapsulated by a stress resistant spore wall. During sporulation, the septin complexes are reorganized and localize to the growing prospore membrane. Shs1 and Cdc12 are exchanged out of the septin complexes for Spr3 and Spr28 by unknown mechanisms. The function of the septins as a result of this reorganization remains unclear, but deletion of Spr3, Spr28 or Cdc10 leads to clear defects in sporulation. In this study, we hypothesized that septins may act as scaffolds likely to be involved in spore membrane extension and spore wall synthesis. We used bimolecular fluorescence complementation (BiFC) to identify septin-protein interactions in vivo for Spr3 and Spr28 in hopes of finding interactions that would suggest functions for these septins. Significantly, we found both Spr3 and Spr28 to interact with Glc7, the protein phosphatase type 1, but at different locations. We then investigated the localization of Glc7 with the mitotic septins to demonstrate specificity in the interactions. Interestingly, aberrant septin complexes were present and the severity varied depending on the mitotic septin. These findings lead us to believe that Glc7 may have large influences, possibly through dephosphorylation events, on the dynamics of septin structures and septin localization throughout the yeast cell’s life cycle.