A Necessary Space for the Environment in American Politics: An Examination of the 2014 Congressional Race in Michigan’s Sixth District 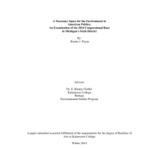 Today, environmental problems such as climate change are becoming increasingly severe, and yet the government is not effectively addressing these concerns. While climate change and the many issues stemming from fossil fuels such as oil are global concerns, the United States has the opportunity to become a global leader in environmental regulation and protection by moving away from fossil fuels and mitigating the effects of climate change. In order for the United States to move forward in environmental policy, however, Congress must be willing to cut ties with the fossil fuel industry and make significant advances in environmental regulation. The state of Michigan holds a great stake in protecting the environment due to its rich resources. The Great Lakes provide drinking water, recreational areas, and a basis for Michigan’s economy. Currently, Michigan’s sixth Congressional district, which makes up southwest Michigan, is represented by House Energy and Commerce Committee chair Fred Upton. Since his time in office, Congressman Upton has moved to the right of the political spectrum, often voting against the environment. Paul Clements, a Western Michigan University professor, ran again Congressman Upton during the 2014 election in an attempt to unseat the entrenched Congressman. Mr. Clements ran on the basis of a strong environmental platform largely centered on the issue of climate change and bring clean energy jobs to southwest Michigan. While Paul Clements lost the election, his campaign was able to bring environmental issues to light within politics.