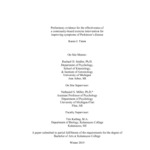 Parkinson’s disease (PD) is a common progressive disease in which patients gradually lose brain cells that rely on the neurotransmitter dopamine. Currently, there is no known cure for the disease. While several drug and surgical therapies are available for PD, their effectiveness for certain symptoms is limited and the benefits of therapy are time limited. This study examined whether vigorous exercise during a regular class offered at the YMCA mitigates PD symptoms. Here, we focused on the effects of cycling on reaction time, movement time, and disease severity in PD patients by taking baseline measurements prior to the start of the intervention then testing patients after four and eight weeks of exercise. Vigorous cycling for eight weeks showed significant improvement in reaction time to left facing arrows and marginally significant improvements in movement time during testing. There was a significant improvement in reaction time after four weeks of cycling, but this effect did not remain after eight weeks. The lack of a control group was a major confounding variable in this study. Without a control, the significant effects seen in the data cannot be attributed to the exercise intervention and are likely due to practice effects. These results along with results from similar studies highlight the need for further research into the area of exercise, and specifically community-based cycling, as a possible therapeutic approach for PD patients. If further research suggests that vigorous cycling may help to improve PD symptoms, a community-based exercise program could be used in combination with drug and other treatments to improve the lives and overall wellbeing of individuals with Parkinson’s disease.