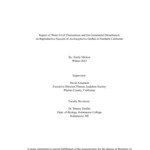 Migratory birds are particularly sensitive to human impact and environmental changes because they depend on separate breeding and wintering habitats. Western and Clark’s Grebes, migratory waterbirds of the genus Aechmophorus, build nests and raise their young in freshwater wetland environments. This study investigates factors affecting the reproductive success of Aechmophorus grebes in three Northern California lakes. Data from previous years will be compared to data from 2014 in hopes of examining long-term population changes. Methods include water level monitoring, population and nest counts, and disturbance surveys. Wildlife cameras were used to provide further insight into the types of disturbances occurring, acting as “case studies” on individual nests. Findings indicate that water levels dropped at similar rates compared to previous years, but began and ended at lower elevations. Severe weather conditions were related to grebe re-nesting on Lake Almanor and lack of successful nesting on Lake Davis. Predation and human disturbance were both associated with nest abandonment and egg loss. Together, these results provide support for the importance of conserving grebe populations through careful management of water levels and increased human awareness. Future research should continue to investigate the human-controllable factors affecting Aechmophorus grebes with the goal of protecting these vulnerable species.