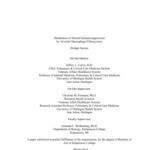 Several studies have documented that patients with Chronic Obstructive Pulmonary Disease (COPD) who are taking inhaled corticosteroids (ICS) are at an increased risk of pneumonia. The contributing factors involved have not been identified. It has been observed that individuals suffering from COPD have increased numbers of apoptotic cells in the lungs. The uptake of apoptotic cells (AC) by alveolar macrophages (AMϕ) a process known as efferocytosis, suppresses alveolar macrophage mediated immune responses and may impair their ability to fight infection. Glucocorticoids (GC) increase alveolar macrophage efferocytosis and this effect is termed Glucocorticoid- Augmented Efferocytosis (GCAE). The aim of this study was to demonstrate that GCAE explains the increased risk of pneumonia that is observed in COPD patients on ICS for pneumonia. To test our hypothesis, we used both an in vivo murine model of pneumococcal pneumonia and in vitro murine alveolar macrophages. We found that GC followed by AC significantly reduced the ability of alveolar macrophages to make various cytokines and chemokines following stimulation with either LPS or heat-killed Streptococcus pneumoniae. Furthermore, mice treated with GC followed by AC before infection with S. pneumoniae developed significantly higher lung Colony Forming Units (CFU) consistent with an observed decrease in the ability of alveolar macrophages to kill viable pneumococci. In conclusion, we demonstrated that GCAE maybe one potential mechanism contributing to the increased risk of community acquired pneumonia (CAP) in COPD patients. The long-term goal of this experiment would be to develop specialized therapies to overturn the defective immune response.