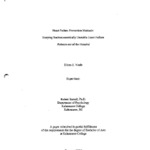 Heart failure (HF) is a national epidemic, affecting almost 5 million people in the United States, with an additional 550,000 people diagnosed each year. Currently, government organizations, like the Centers for Medicare and Medicaid Services, are penalizing hospitals when HF patients are readmitted to the hospital within a 30-day span from their initial discharge. Because these readmissions are common, costly, and potentially avoidable, healthcare organizations are searching for new methods to keep HF patients healthy and out ofthe hospital. While many studies have found success in various multidisciplinary approaches to healthcare, they have been unable to decipher which techniques are the most effective in decreasing readmissions. This is a proposed study that intends to compare the effect of two preventative techniques on hospital readmissions and mortality rates for HF patients, using a specific population that is socioeconomically unstable and has been underrepresented in previous studies. Specifically, this study examines the influence of Telehealth monitors, which measure HF patients' daily vitals, on hospital readmission and mortality rates in comparison to the influence of follow-up phone calls, which allows clinicians to reinforce HF education with their patients 3 days after their initial discharge, on hospital readmission and mortality rates. It further examines the psychological principles related to behavioral change that play roles in these two methods and improve HF readmission and mortality rates. While this is a proposed study, I strongly believe that participants who use telemonitors will have significantly lower mortality and hospital readmission rates in comparison to either participants in the control group or participants who receive follow-up phone calls. I propose that telemedicine mechanisms, like telemonitors, may be the most effective tool, benefiting both socioeconomically unstable HF patients and their hospitals, to decrease hospital readmission and mortality rates.