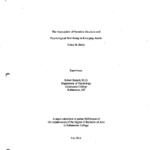 The purpose of the present study was to explore the relation between narrative structure and psychological well-being in emerging adults. Self-defining memories, challenge memories, and self-report surveys of life-satisfaction and symptoms of depression were collected from (N= 175) emerging adults in an original study conducted by Mitchell, Syed, McLean, and Wood (2014). Self-defining and challenge narratives were coded by two independent coders in the present study for domain category, meaning-making, and redemption (i.e., narratives beginning with a negative event and ending with a positive outcome) versus contamination structures (i.e., narratives beginning with a positive event and ending with a negative outcome). In response to evidence suggesting a significant relation between narrative structure and well-being, it was hypothesized that the emerging adults who constructed narratives containing meaning-making (i.e., narratives from which the storyteller gleaned significant meaning) or redemptive themes would report higher life-satisfaction whereas emerging adults with narratives containing contamination structures would report higher self report symptoms of depression. Contrary to the hypothesis, the results of the present study suggest that redemption and contamination narrative structures do not predict psychological well-being in emerging adults; however, insightful meaning-making in challenge memories was found to be significantly associated with higher levels of well-being. A possible explanation for the discrepancy between past studies regarding redemption and contamination narratives and the present study could be a result of different methods of narrative collection in the original study. Additionally, it is discussed that emerging adults may simply not structure redemption and contamination narratives in the same way that narratives have been constructed by individuals (mainly mid-life adults) in previous studies.