Learning from "Battle Hymn of the Tiger Mother", Comparison of Chinese and American Child Rearing 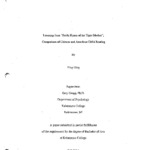 Amy Chua published her parenting book in 20 11 , which raised controversy and widespread discussions about Chinese and American parenting styles. Since then, "Tiger mom" .became a symbol of Chinese harsh training (Chao, '1994), but not western authoritarian parenting. Appraisals and criticism about her parenting appeared in both China and America. There were argument~ about whether her parenting was ·effective and whether she could speak for most Chinese parents. Historical beliefs, cultural, child rearing ideology, and social structures were extremely different in both countries, and each had its special problems with child rearing. In general, researchers have found that Chinese parents tended to be stricter than American parents, and more closely control their children's activities. American parents, by constructs focused more on allowing freedom and encouraging creativity.