A Continuum of Options : Changing Attitudes Towards Marriage Among Young Women Today 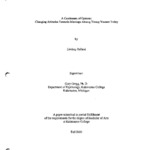 While studying overseas late last February, I received an unexpected phone call from my sister, Becky. Four years my senior, Becky acts not only as a beloved sister, but also as a mentor, therapist, comic relief, and best friend. Struggling with culture shock and language barriers in a foreign country, the sound of my sister's voice was music to my ears. What she told me, however, would cause me more immediate distress than any of the troublesome experiences I might have in that foreign culture. "Last night Zack proposed to me. We're using Mom's diamond to make the engagement ring, so he didn't have the ring in his hand, and he wasn't down on one knee or anything but. .... We're thinking about sometime in July." Silence was the only reaction greeting my sister's announcement. When she started wearing make-up, that was my cue that four years later I could wear make-up. When she shaved her legs, four years later, I got to shave mine, too. When she graduated from high school, sure enough, four years later, I did, too. And now she was getting married. Where was the appropriate reaction of enthusiasm and glee from the younger sister, thrilled to be in a wedding party celebrating their union? Where was the envy and joyful suggestions appropriate for a wedding announcement? To Becky's disappointment, I could muster none of these reactions. I was happy for her, of course. Her fiance was a wonderful man who'd already received my stamp of approval. They would have a secure future together, they were emotionally supportive of each other, they'd had plenty of ups and downs to constitute a decent trial run ... and yet the thought terrified me. Days later, though still having difficulty with the idea, I began taking a more objective look at things. Becky had always wanted to get married. She'd been voicing her desire to settle down and raise a family for a few years, but I hadn't really taken her seriously. Eventually it occurred to me why. I have no desire to get married. Not only do I not see such a big step in my immediate future, I don't see a wedding in my future at all. If and when I find a lifelong companion, why on earth would I need a marriage contract to verify that commitment and hold us together? How was it that my only sister, born just a few years before me, raised in the same environment, and having so much influence over my own upbringing, could have such a fundamentally different outlook on marriage? With a combination of curiosity and desire to ease my misgivings about the whole situation, I began to do some informal interviewing among my friends. Were Becky's marital aspirations commonplace among the rest of my peers or did some favor my own opinions on marriage? What I found interested me exceedingly, and provided the inspiration for this project. Neither Becky's views nor my own were part of a majority among the young women I spoke to. Each person I asked had a unique attitude towards marriage and often they varied quite a lot in their reasons for feeling the way they did, as well as in their expectations concerning marriage.