Utility and Discourse in Urban Environmentalism 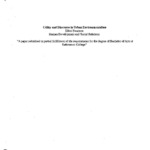 One of the most important demographic shifts over the last century is the urbanization of the world's population. For the first time ever, more humans now reside in cities than elsewhere. Cities create massive environmental problems for human health, the global climate, global ecology and Earths long term habitability. At the same time cities also hold amazing potential for reducing humanity's environmental impact, while providing for our material and psychological needs. Cities draw together many of Earths major environmental problems: population growth, pollution, resource degradation and waste generation. Paradoxically, cities also hold our best chance for a sustainable future. An urban focus on environmentalism also brings the movement to its philosophical core: a concern for our ability to live prosperously on a planet we are wholly dependent on to survive.