Popular Legal Solutions to Prostitution : An Examination of their Social and Political Consequences for Women 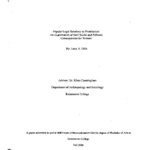