Another Side : A Photography Senior Individualized Project 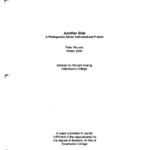 The "8x10" view camera takes the idea of having a small screen on which to compose your image and increases it greatly. While shooting with the large format camera what you see on the screen is what you get. There is no way to enlarge or crop the image in the darkroom after the fact which forces you to be accountable for everything you put in the frame. At the same time a large format camera does not have a mirror or prism to correct the orientation of the image. The image projected onto the ground glass in the back of the camera is both upside down and backwards. This abstraction of the image forces you to think about the image simply as a formal composition, and not just as an emotional and intellectual reaction to what you see. Using such a large and awkward camera makes each photograph such a long process that you think twice before you go about setting it up. To set up a single photograph you must set up the tripod, unfold the camera, mount it on the tripod, lock the lens open and frame the shot. Composing and framing is time consuming due to the size and weight of the cameras well as the fact that raising or lowering the camera must be done with the tripod. Once the shot is framed the way you want you have to take a light reading with a separate light meter, set the speed and aperture on the camera, at which point you can no longer see the image on the glass. Finally you insert film holder and remove the slide that protects the film from exposure. At this point the camera is ready to make an exposure and you must wait for your subject to look just the way you want and click the shutter. Then you must put the slide back to protect the film and repeat the whole process for the next exposure