The Princess and the Pearl : A Photography SIP 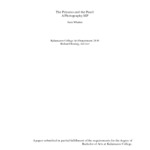 The author explores the concepts behind fashion photography and the execution of it. She wanted to learn how to put together scenes, direct and model people, work with different types of lighting and photograph a variety of compositions. Along with learning the photographic side of the fashion industry and fashion advertising, she wanted to work with the production of the material, making the clothes that would be photographed on the models. The title, “The Princess and the Pearl” came from a childhood fascination with the idea of letting childhood fairy tales grow up with the children who love them; to take something familiar, that rarely has any variation in terms of how it is represented and turn it on its side— allow the viewer to see a completely new side of a timeless story. In the end, the story is meant to be, in part, a visual narrative of “The Princess and the Pea”, like a large picture book. The photographs are meant to be part of a series, yet, should also be able to exist on their own and a single piece of art. Though, in terms of narrative, each photograph is dependent upon the other eight in the series, alone, the images are meant to be strong enough to stand alone and need very little explanation. They completely change meaning in each context. Obviously, in the series, they are each part of a greater whole to be read and understood in a certain order. However, when they are separated and placed in different environments, they are meant to be understood as, more or less, art for art’s sake.