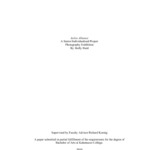 Distilled down to its most basic elements, photography is a medium of inherent tensions and dualities. Light, the most essential component, is both what creates and destroys a photograph. While in one application photography is used to capture, reveal, and document the fundamental truth of a moment, it is also used as a tool to construct and deceive. An important aspect of this relationship is that this fundamental truth of a situation or object is relative and only exists for a finite amount of time. The author has always been drawn to the physicality of photographs as well as the relationship between photographs-as-images and photographs-as-objects. This body of work is centered around what the author calls “Active Absence” and define as the idea of something having a perceivable physical presence even after the original object, person, or idea that created it is gone. It is about impressions and imprints left behind. The focus shifts from specific to general in that the images do not aim to define any one particular object’s truth, but rather assert a ghost like presence and attention to the fact that something, at a point in time, was there.