Wanderlust: Searching for Something and Finding Yourself 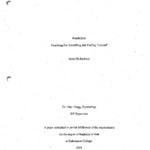 This paper examines five travel novels through the lens of the developmental psychology theories formulated by James Marcia, Carl Jung, Marie-Louise von Franz, and Erik Erikson. The tales all begin with a main character who feels as though he. is lacking something and sets out on a journey to find this unknown but desirable target. Marcia (1996) would consider these people in a period of crisis, or moratorium, because they are actively trying to reconcile the different parts of their lives and beliefs. Von Franz ( 1982) would suggest that although they seek an external solution to the internal disconnect between their conscious and unconscious, along the way, their unconscious guides them. As they become more receptive to it, they discover that to which it was leading them. In Erikson's (1993) opinion, they are simply experiencing the conflict that is essential to each of his eight developmental stages, and so they hunt for ways to regain the balance that comes after reconciling with the conflict. Although this study hypothesized that the journeys these characters embarked upon were identity-quests. However, three of the five cases seem to be dealing with intimacy and isolation issues instead. These conflicts were solved by the character listening to and acting upon their own thoughts and desires throughout the adventure, with the exception of Jack Kerouac's character, who instead chased the whims of another. Ultimately, a person who feels incomplete needs to open communication to their unconscious through analysis of dreams and desires. In doing this, one can discover what is lacking within them and can actively go about filling that vacancy, thus achieving a balanced personality and a feeling of fulfillment.