Looking to Cleveland's Economic and Social Past to Understand its Future 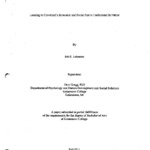 The titled "Rust Belt" cities have long been a source of concern and curiosity to economists, sociologists, and politicians. Throughout history, these cities have come to represent the essence of industrialization, deindustrialization, and later the driving forces of recovery from the current economic crisis. Cleveland, OH has been pointed to as a model of the Midwest, as it is one the. best cities that represents the journey of Rust Belt. By researching Cleveland's economic past and looking at its social dynamics, the circumstances of its current state, and those of other cities like it, are made clear. Rust Belt cities are still struggling and their failure or success is still yet to be decided. However, it is evident that improvements must be made. We as Americans will need to rethink our economic and social approaches if we wish to recover and thrive in this international climate.