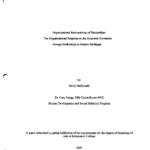 The automotive industry is a leading industry in Michigan. Michigan has been known as a primary developer in automotive production. With the downturn of the economy, as well as a credit crisis in the United States, the automotive industry is in jeopardy. The 'big three' automotive manufacturers in Michigan have done some major organizational restructuring. The big three automotive manufacturers consists of For Motor Company, Chrysler Group, and General Motors Company. Ford Motor Company restructured their entire company a few years ago, when new CEO Alan Mulally foresaw the credit shortage. General Motors Company and Chrysler Group were not as lucky, and both companies filed Chapter 11 bankruptcy in 2009. Chrysler Group and General Motors Company sent out letters of termination to dealerships around the country, resulting hundreds of thousands of jobs lost. The dealerships received nothing for their years of devotion to the automotive brand. In order to survive, organizational restructuring has recently become necessary through many dealerships in the United States. This restructuring has prevented dealerships from receiving a letter of termination, as well as kept them alive during the economic turmoil. The redesigning of automotive dealerships in Eastern Michigan directly relates to organizational ecology and its theory of isomorphism.