"A Gaudy Rome or an Innocent Eden" : Early 20th Century Portraiture from the Kalamazoo College Collection 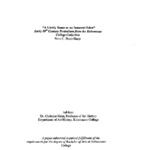 In a culture obsessed with the construction of identity, portraiture has the unique ability to reveal multiple identities in a single image. While portraits usually focus on the depiction of the patron's face and possessions, they also provide an opportunity to gain a fuller picture of the artist and their aspirations, the subject's self-image, and the contemporary viewer's perspective. The portraits in this exhibition were created between 1860 and 1940. They came from a time when Americans were seeking to define themselves as a new liberal democracy that was equal to the cultures of Europe. While artists were trying to develop a uniquely American expression in their work, their sitters, the expanding upper class, wanted to endow themselves with a cultural heritage through their portraits. This tension defines early 20th century portraits as a pivotal moment in the development of national character. Photographic and painted portraits in the 19th century show their subjects as austere symbols of social standing and power. These images were an exclusive means for wealthy and important Americans to secure their •status. In the 20th century, the development of photographic technology democratized portraiture. This new access led to increased interest on the part of artists and patrons in conveying the sense of an individual behind the facade of their surface features. This same tension between status symbols and individuality is present in the portraits of this period from the Kalamazoo College collection.