A Woman's Prerogative : Female Painters in 16th and 17th Century Italy and the Netherlands 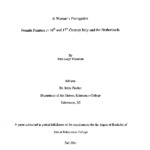 The author reviews the life and work of six women : Levina Teerlinc, Maria van Oosterwyck, Fede Galizia, Artemisia Gentileschi, Lavinia Fontana, and Sofonisba Anguissola. She concludes that these six incredible, passionate women, along with so many of their female colleagues, challenged social norms and surpassed expectations of women artists. They were often unappreciated and those who were recognized had to work twice as hard as their male counterparts to gain the respect of the art world. The expectations of childrearing and housework cut short many careers almost before they had started, and most women's denial into artistic guilds and academies prevented so many others from even beginning artistic careers. Women were considered intellectually inferior and creatively deficient. Because of these assumptions women's artistic training was rarely as extensive as that of men, putting them a disadvantage. These women have proven that despite preconceptions of their inadequacy and, later, history's attempts to erase their memories, their talent, as well as their courage and dedication, they can transcend the limitations of their sex to become supremely successful and well respected.