Cultural Influences Concerning the Art of the Alhambra 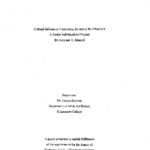 The author explores the cultural, political, and economic climate of Granada, Spain during the years when the Nasrid Dynasty ruled the region. Connections are made between the artistic and social culture of the area and how the multi-cultural history of the location affected the construction of its most impressive monument: the Alhambra. Yusuf I and his son Muhammad V mainly constructed the Alhambra Palace Complex and the palaces in which they lived are known as the Comares Palace and the Palace of the Lions. These architectural systems gained inspiration from materials the artisans had available to them as well as other cultures with whom they traded internationally. It is argued that the international character of the Nasrid Dynasty led to the uniqueness and later renown of the Alhambra because the artistic culture was able to develop in a diverse environment.