The Studio and the Sons of the She-Wolf : Context and Controversy Surrounding Rome's Stadio dei Marmi 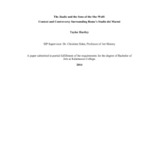 This paper will study in-depth the history behind and aesthetics of the Foro Italico stadium complex in Rome (built in the 1930s), with a particular focus on the Stadio dei Marmi, or Stadium of Marbles. Originally called the Foro Mussolini, the Foro Italico is a huge relic of Italian Fascism, the remains of Benito Mussolini’s “sports city” that was intended to promote athleticism and flaunt the power of Fascism. With the exception of the Olympic Stadium, which has been rebuilt several times, the complex remains largely intact today. This paper discusses the Stadio dei Marmi as a representation of the struggles for unity in Italy and the new Fascist ideals of masculinity and meditates on the survival of the Fascist monument. Additionally, the postscript briefly discusses the statues of the Stadio dei Marmi as centerpieces of the gay kitsch and Camp movements of the 1980s.