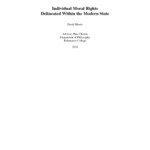 The Universal Declaration of Human Rights adopted in 1948 by the United Nations set forth a common understanding of human rights as freedoms that all humans ought to be free to realize. Broadly understood it is a set of international norms that United Nation member countries abide by and aim to provide to all humans-particularly their own populations. Yet there is often news of abhorrent violations of these "universal" rights and no international enforcement mechanism to provide certain protection. As such, the claim that human rights are universally held is, practically speaking, a limited reality. Therefore, I find it appropriate to examine the concept of human rights as functioning against the backdrop of a particular governmental structure that is handled and shaped by its own public. I will focus on the liberal constitutional democracy that exists in the United States. I will interchangeably use the term modern state when referring to this system of governance. These terms describe a secular system of government elected of, by, and for its people following the supreme law of an amendable constitution. I am focusing on the realities of human rights within the United States in part due to my invested interest in robust rights domestically; and in part due to the United States' standing in the world as a developed country.