Unlikely Allies : A Comparative Analysis of the Political Careers of Willy Brandt and Richard Nixon 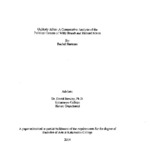 Both Brandt and Nixon took difficult routes to get to the top of their nation's government. Their familial circumstances left much to be desired and though their early political careers were successful, they both entered a period of political depression and insecurity after important national losses. While their political careers could have ended in the early 1960s, they continued to work to increase the political standing of themselves and eventually came to be seen as indispensable to the political parties that they belonged to. Revamping not only themselves but also their parties throughout the 1960s, each man won a major victory when elected to lead their government in 1969. Then, possessing the ability to influence foreign policy, they moved quickly to enact their comparative policies of detente and Ostpolitik, soon changing the face of Cold War diplomacy. The way in which their careers compare and eventually intersected can show us that the new Cold War diplomacy that came about during the early 1970s was less of a personal crusade and more of an intra-national generational move towards a more stable world order. That Nixon and Brandt, two men on ideologically opposite sides of' the political spectrum, could separately develop such similar policies relating to East-West relations shows that this move towards diplomacy and international cooperation was not necessarily a product of Brandt's experience in Berlin or Nixon's experience on the Herter Committee, but instead a more worldwide movement away from the increasingly antagonistic world order. While Nixon and Brandt had very different reasons for pursing detente and Ostpolitik, the fact that each man was ultimately successful in using this policy as a framework for international discussions was the first sign of the increasingly stable world order that has evolved since the end of the Second World War.