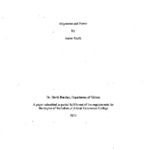 This paper will take the form of a critical review essay to answer this question of power and hegemons. The paper will use varying sources such as, scholars ranging from political scientists, to naval historians, to world-systems theorists. Each author has their own unique perspective on how to view the world, and why their idea is a fundamental paradigm to be followed when discussing power. This paper will of course be clashing these ideas together to create discourse, show flaws and weaknesses, as well as provide historical analysis based on the theories that these authors postulate. Primarily, this paper will show how hegemonic powers cannot achieve this position of dominance alone. The success of a hegemon appears to be reliant on the international economy that to some degree is insured by its own wealth and power; but in reality the international economy is not complete without an international coalition of cooperation. This also implies that there is some form of relationship between the international economy and hegemonic power. The topic of hegemony in history remains a heated discussion among scholars of the 21st century. For the purposes of this paper a hegemon will be viewed as a global leader that seeks economic and military power through the use of free trade. This definition has been built by consolidating the views of several authors. The concept of hegemony roots itself within Charles Kindleberger' s theory of Hegemonic Stability. "He argues that a hegemon can provide the collective good of global stability, and that the absence of such hegemonic leadership worsened the Great Depression." A collective good implies that everyone is able to partake in the luxury of global stability. However, a collective good also implies that other states are also buying into the concept as well. "Stability can only be assured when a hegemon both bears the costs of providing the collective and extracts the support from others. "