The Impact of the Scottish Independence Referendum of 2014, Considering Historical Precedents and Current Issues 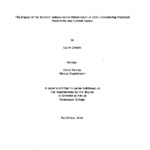 From 2014 onward, September 18 could forever be known as Scottish Independence Day. On this day the Scottish people will vote on whether to separate from the UK after a three-hundred year union. The Scottish National Party, or SNP, has sprinted into the foreground of UK politics after decades of struggling to win over an indifferent Scottish public, and has transformed the independence issue from a far-fetched, romantic notion to a serious option for Scotland's future. Despite this achievement, the battle for public opinion may be harder won than the Battle of Bannockburn. History has shown that the Scots are generally unfavorable toward a complete split from all the benefits of the UK, and opinion polls suggest that the SNP has not provided sufficient assurance against the economic risks involved. This analysis of the Scottish independence movement takes into account comparisons with other nationalist movements as well as expert opinions on the economic and political practicalities of independence, in an attempt to answer three main questions: whether Scotland will vote Yes in September, why it took so long for an independence referendum to occur, and how the SNP evolved from an extremist fringe group to the leading party of a devolved Scottish parliament.