The Reality of Collective Action in Chile : An Analysis of the Relationship Between the Student Movement and the Mapuche Movement in Chile 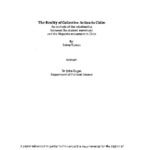 The present study aims to focus on the disparity between the students and the Mapuche activists, or the strongest and weakest movement groups active in Chile today. Though many believe the student movement inspired these smaller movements, little work has been done concerning the interactions between these groups. Generally, the students are credited with providing an inclusive space within their protests, provoking the larger populace to express dissent towards the government and engage politically on a scale not seen since the fall of Augusto Pinochet's military dictatorship in the 1980s. Among the activists and community members interviewed, many referenced the abundant presence of Mapuche flags at student demonstrations as a sign of such solidarity. However, the extent to which this is true has not yet been proven, especially in comparison to a historically disadvantaged movement like the Mapuche. The present study seeks to fill this gap in social movement studies within Chile. The author explores different Chilean groups, but specifically if and how the two most controversial Chilean social movements relate to each other. The author argues that the political and social advantages afforded to the student movement throughout history explain their relative success. Mapuche mobilization, on the other hand, has not only been legally limited, but also historically repressed to a much larger degree than other movement groups. Actions on the part of the students towards cooperation and solidarity have helped publicize the Mapuche conflict concentrated in the region of La Araucania. However, much of the rhetoric describing the respectful and reciprocal relationship between the groups has remained just that: rhetoric. By identifying certain failings in the relationship between the movements, the author provides a clearer conception of collective action in Chile and the future of its political system. With hopes that these movements will reform what remains of Pinochet's decades long experiment in neoliberalism, it is important now more than ever to question the efficacy of their aims and intent to achieve a united front.