Kung Fu Struggles : How Martial Arts Films Continue to Perpetuate East Asian Stereotypes in the US 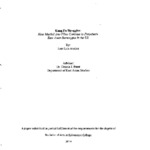 The martial arts films that were analyzed in this paper have shown that East Asian and African American stereotypes are perpetuated. The concepts of mysticism, revenge, honor and dishonor have all been presented in ways that only continue to produce inaccurate images. Miyagi and Han for example, are able to use techniques to heal their students that seemingly have no explanation, except that these techniques originated in their homelands (Media Action Network for Asian Americans). In Enter the Dragon, Lee is shown saying: "You have offended my family and you offended the Shaolin Temple." Similar to how Mu Bai seeks to restore his master's honor by killing Jade Fox, Lee cannot let the offenses slide. Even with scenes that challenge stereotypes, the progress is undermined by a different stereotypical element. This is demonstrated in Rush Hour when the sound of a gong is heard when Lee reveals he can speak English, much to Carter's surprise. As stated before, Asians are not the only group stereotyped in these martial arts films. In Enter the Dragon, Williams slept with four women of his choice once they were presented to him. Through dialogue, Williams reveals that due to his tiredness he can only take four for the night, playing on the stereotype of hypersexualized African American man. By understanding that positive stereotypes are ultimately negative, there is no particular party to blame. Everyone has a role in these films from the scriptwriters, to the actors and directors, to the audiences that choose to view these films.