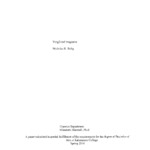 With his victory at Actium over the combined powers of Marc Antony and Cleopatra of Egypt in 31 B.C., Gaius Octavian Caesar stood alone atop the political and military power structure of Rome and the western world. This pivotal moment in Roman history marked an end to nearly a century marked by civil war as well as political violence and discord. This end, signified by the ritualistic closing of the Temple of Janus in 29 B.C., enabled Octavian-later granted the title Augustus and an imperium often years by the Senate in 27 B.C. (Scullard xvii)-to reach a position of unrivaled power and influence within the Roman Republic. However, as evidenced by previous martial despots such as his adopted father, Julius Caesar, military might and victory on the battlefield alone proved insufficient in maintaining unbridled authority in Rome. With the victory in Actium, Octavian's work was concluded, while that of Augustus had just begun. The reasons for Octavian's name change could very well be innumerable or unidentifiable in totality, but perhaps the most prominent reason was to create a disconnect between the brutality and proscriptions that allowed Octavian's ascent to power and his new desired role as the benevolent pater patriae. The assumption of his new name, as well as his assumed role as the father of Rome, coincided with a wave of reforms-social, moral, legal, religious, and military-aimed to solidify Augustus' power and to usher in his image for the future of Roman politics and society.