WAR : How the Application of Innovative Statistics Have Changed Baseball's Free Agency 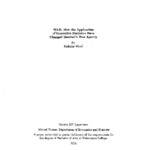 This project investigates the extent to which baseball teams can improve the allocation of their resources in the market for free-agent players. More specifically, attempts are made to show that, with the application of advance statistical techniques known as sabermetrics, owners are actually doing a better job of offering contracts to the right players than they were in the past. The study covers the period from 2000 through 2013, and deals exclusively with large contracts-those that are the top deals for the years under consideration. The analysis section of this project is done using two different types of econometric models, namely, hedonic and time-series regression analyses. The analysis uses econometric models to relate salary data to the performance of free agent players. The analysis also incorporates time-series regression by equating the performance of players for a given position (for example, shortstop or outfielder) to one another over time. The result from this analysis shows statistically significant relationship between performance and player's salary. This result also provides some clues on the contract values of free agents. The result of the time-series regression is found to be inconclusive. That is, while the outcome of the regression parameters, as shown in Chapter 4, were consistent with theory, they were not statistically significant. This is rather disappointing to the extent that it was not possible from this study to verify that the adoption of advance statistical practice (i.e. sabermeterics) would contribute to the improvement of allocating free-agent players to the right team, that is, where their marginal contribution to the team will be the highest. As discussed in the conclusion part of the SIP, one of the reasons for this may be the tentative nature of this study. The conclusion section also attempts to offer suggestions on ways how to improve future research endeavors in this area.Publicly available at the request of the author 9/2/2014.