An Assessment of the Cocoa Sector in the Volta Region, Ghana : Cocoa Board as a Monopsony in the Region 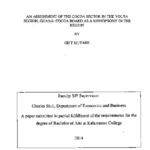 This paper examined the cocoa sector in the Volta region, located in the west of Ghana, by analyzing data collected from primary and secondary sources. Interviews with farmers from Wli and Likpe-Bakwa villages were performed to find information on the activities of Cocobod's Produce Buying Company in the area. From the interviews, information on general feelings of farmers about the presence of the Produce Buying Company were inferred. Furthermore, producer patterns were considered to understand the changes in production over the past two decades. Another set of interviews was performed with Cocobod's subsidiaries representatives. From these interviews, information was gathered on the activities the governing body has taken to ensure that it holds its monopsony in the region and villages under consideration. Finally the data was used to ascertain the benefits that producers have received since the introduction of competition within the internal cocoa sector. Various studies were used to arrive at conclusions regarding the overall performance of Licensed Buying Companies. This inference was important because it gave insight as to why the sector in the Volta region is uncontested. Overall the research found that farmers do not feel threatened by the presence of the government-owned Produce Buying Company. On the contrary farmers in Wli were seeking to repair their strained relationship between them and the Produce Buying Company. Officials from the Produce Buying Company viewed smuggling as a prevalent problem in the bordering villages. As a result they do not have Purchasing Clerks (PCs) situated in those areas. It was also established that only Produce Buying Company operates in the region, henceforth it has monopolistic control in the region. For this reason, the company is able to refuse cocoa from any village suspected of smuggling. The conclusions from these findings indicate that the current system is working well for both producers and domestic consumers. Farmers in the region feel more comfortable selling their produce to the Produce Buying Company and in return they enjoy subsidies from the government. These benefits include higher shares of FOB and inputs at subsidized prices. The Produce Buying Company is expected to remain a monopoly in the region as long as production continues to decrease. Licensed Buying Companies compete on volume and the region under consideration does not produce enough to attract any to the region. Generally a partially liberalized system has proven to be beneficial for farmers in all regions, as a result government involvement is expected remain welcome in the region for a long period of time.