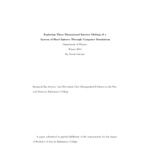 Currently, there aren't any theories that explain the process and mechanisms involved in three-dimensional melting. Experiments have shown that melting is usually initiated at surfaces or crystal defects. However, recently, there have been some experiments done in which they investigate three-dimensional melting by examining the interior during the melting process. One such experiment was done by a research group in Hong Kong, led by Ziren Wang, in which they superheated the interior of colloidal crystals. To investigate this phenomenon further, we used the hard sphere model implemented with the Metropolis algorithm to simulate an experiment similar to Wang's experiment. We performed approximately 100,000 Monte Carlo steps for a range of volume fractions, (),(control variable). From the simulations, we were able to find the melting transition, 0:55 _() _ 0:49, which is the same as the experimental values for hard spheres not undergoing superheating. The calculated pressure of the system showed that the melting is a first order phase transition. We also attempted to do a percolation analysis similar to an experiment done by Harvard researchers, whose results showed a continuous percolation transition during melting transition. In our simulation, we obtained data that showed one large cluster which was not sufficient to perform an analysis. Although we did not find the mechanisms for three dimensional melting, this simulation brings us a step closer to understanding this phenomenon.