AMPA-type Glutamate Receptor Trafficking in Neurons of the Hippocampus 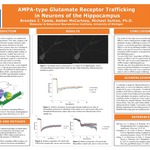 Learning and memory, as well as cognition, are mediated by networks of interconnected neurons. Over time, synapses with high levels of activity will become stronger and more easily stimulated to depolarize the neuron. Because of the feed-forward nature of this process, neurons must use a mechanism to prevent changes in homeostatic levels of action potential firing. The proposed mechanism is called synaptic scaling, in which all synapses of a neuron are “scaled” up or down in strength to maintain firing levels. This scaling relies on the movement of AMPA-type glutamate receptors to and from the cell membrane. Although this movement is extremely important to neural function, little is known about the mechanisms by which it occurs. In this study, we investigated a protein complex (Figure 1) that has previously been shown to regulate synaptic function. We inhibited the lipid kinase in this complex known as PIKfyve/Fab1, and measured the exocytosis and insertion of AMPA-type glutamate receptors into the cell membrane following induced endocytosis or photobleaching assays.