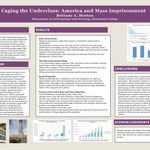 The prison population in the United States has grown at a high rate since the 1960s, with immense disparities occurring along lines of race and class. This is due to practices like race and class based profiling, policies associated with the War on Drugs, issues of the prison industrial complex, as well as the popular image of the prisoner. Popular conceptions of the typical criminal are used as a method of justifying the race and class based practices that lead to the imprisonment of poor minorities and control of the lower class.