The Grameen Social Business Model and its Poverty Alleviation Methodology 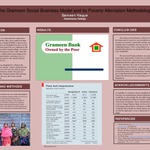 The purpose of this study is to understand the complexities that arise from poverty and how they can be addressed using the Grameen Social Business Model (GSBM). I chose to do a case study of a social business in Bangladesh because it is the country where the theoretical framework was established with the microfinance institution called, Grameen Bank. It is also a developing nation, one of the poorest in the world, where the low-income or poor make a dollar and in some instances less than a dollar a day to support families consisting of two or more members. For some perspective the, annual GDP per capital in 2012 was $2,100 (est.). In country comparison, Bangladesh is 192nd in the world. Bangladesh is a “low income” country (defined by the World Bank) which makes it a relevant case study to gauge the effectiveness of social business model. The goal is to unpack the various ways the Grameen model can be put into practice to drive value for the poor, the society and the economy around the world.