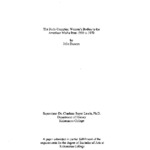 From 1950 to 1970, the American media helped to define standards for feminine beauty and figure. The depictions of women in movies, television shows, and magazines provided an archetype that instructed women on what they ought to look like to be considered beautiful or sexy. However, this archetype was split between displays of women's bodies in media as marketed to women and images of women's bodies in media that was marketed towards men, a decidedly much more sexualized form. Though the nature of these two separate forms was certainly different (the figure marketed to men depicting highly sexualized female bodies while the other did not) these two forms matched from 1950 to the mid-1960s, both showing that the ideal female physique was that of an hourglass. By 1965, however, these two forms split, creating two sets of contradictory expectations for women to reconcile: one form showed that women should have an hourglass figure, while the other portrayed tall, thin, straight-bodied women. Over the course of these two decades, pornographic material became increasingly thrust into the public by newly popular publications, such as Playboy, and images of sexualized women became more and more prevalent in popular movies and television shows. Not only did displays of sexuality become increasingly popular, but they also depicted increasingly sexualized women. However, these depictions of sexualized women and sexual behavior were not without opposition. Many of these responses show that the sexualized images of women's bodies as presented by the media to the public was dangerous and destructive, and threatened the institution of American morality. Some women, however, were able to use their fame and status as sex symbols to confuse existing notions of gender by not only acting as visual proof that women could, in fact, be interested in sex, but also by using their bodies to challenge and mock existing ideas of female beauty, thereby subverting the patriarchal construction of the virgin/whore complex, and in some cases even to satirize societal constructions of gender. These women operated under the framework for the ideal female form created by the patriarchy, but they also used their position within it to carve out a degree of power.