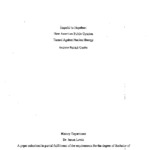 The author traces attitudes toward nuclear energy in public opinion, public policy, and the scientific community from the end of World War II through the disasters at Three Mile Island and Chernobyl. He concludes that it is apparent that the idea of a steady decline in public opinion is not, in fact, what happened. Public opinion almost seemed to fall overnight, but this leaves us with an oversimplified analysis. A closer look reveals that the underlying cause of this fall had been there since the beginning. Fear accompanied nuclear energy into the minds of the American public, and fear has remained with it ever since its creation. On its own, it seemed that this sense of dread would not be enough to call nuclear energy into question. People could write about potential dangers all they wanted, but abstract consequences proved difficult to put into perspective. However, when these consequences were made concrete by the accidents at Three Mile Island and Chernobyl, all of the attacks that had been fended off by economic prosperity hit their mark. Criticisms were validated, and as a result, the United States did not see another nuclear plant licensed for over 30 years after the Three Mile Island nuclear accident.