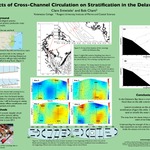 Estuaries are important ecological systems: -Possess one of the highest primary production rates of organic matter in the world. -High species abundance. -Natural buffer between the sea and land. Stratification plays an important role in the mixing of estuaries. The classic theory of tidal straining (Simpson,et al 1990) predicts that an estuary will get more stratified during ebb and less stratified during flood. However, it has been shown that the lateral density gradient created by circulation in estuaries could also effect stratification in estuaries. I will be focusing on seeing how the cross-channel circulation effects stratification over different tidal periods and cycles.