The Effectiveness of Incongruity Humor in an Advertising Campaign: A Proposed Study 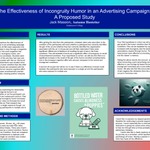 This proposed study examines the effectiveness of Incongruity based humor in an advertising campaign. Undergraduate students (N=60) were separated into three conditions and asked to read through a magazine. Three ads were inserted into each magazine that represented our control, incongruity humor, and incongruity without humor conditions. Students were asked to report the gist of the ads they had read and recall the company associated with that ad. We found that the gist of the advertisements was recalled more often for the incongruity humor condition than the other two conditions. These results are consistent with the theory that incongruity humor requires cognitive effort and subsequently increases advertisement premise recall in viewers while also creating positive company associations.