Distracted Driving: How In-Car Media Use May Affect Driving Ability 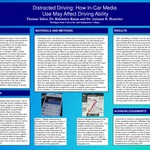 Distracted driving is a significant cause of motor vehicle accidents, especially due to multi-tasking and cell phone use. Research has found that the use of cell phones, especially that of texting and talking, can be detrimental to driving performance (Drews, Yazdani, Godfrey, Cooper, & Strayer, 2009; Owens, McLaughlin, & Sudweeks, 2011; Strayer & Johnston, 2001). Further, there are numerous applications for drivers that include user-generated content (e.g., locations of traffic jams, police traps, etc.) and facilitate social interactions between drivers on the road. Previous research has led to government policy addressing the use of texting and cell phone use, although none have explicitly addressed use of mobile media apps, which are most likely being used. Three separate experimental conditions were created, a control group, a no report group and a report group using the social navigation application Waze while operating their motor vehicle. Driving performance was scored using a non-intrusive mobile application called Dash. It was hypothesized that the in-car use of Waze would be considered in high demand of attention, resulting in significant decline in performance of driving.