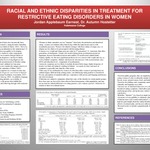 Women of color in the United States have historically been considered immune from restrictive eating disorders including anorexia and bulimia nervosa (Kuba & Harris, 2001). However, various stressors, including acculturation to the mainstream U.S. culture do make these women susceptible to developing disordered eating behaviors similar to white counterparts (Pumariega, 1997). Biases in research (Striegel-Moore & Smolak, 2000) and clinician diagnoses (van Ryn & Burke, 2000) perpetuate the disparities in receiving diagnosis and treatment. For example, the measurements of disorder eating patterns have been formed and validated on Caucasian American women, and may not consider the unique contexts of the lives of women of ethnic minorities (Gilbert, 2003). Therefore, the presenting symptoms in a woman of color may not reflect the criteria of the Diagnostic and Statistical Manual of Mental Disorders (American Psychiatric Association, 2013) (Becker, Franko, Speck, & Herzog, 2003). In addition, language barriers, poverty, help-seeking attitudes, accessibility of treatment, and experiences with racism often inhibit this population from receiving and following through with treatment (Kuba & Harris, 2001).