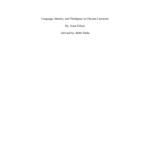 I was raised in a bilingual and bicultural household. My mother was born in Spain and immigrated to the United States to work as a teacher’s assistant and finish her Master’s degree. She met my dad, who is 3rd generation Dutch and was born and raised in the Kalamazoo area. My father considers himself Dutch because his ancestors immigrated, settled in southwest Michigan and, for the most part, married other Dutch immigrants. In reality, he is more American than anything, because no one the family speaks Dutch or strictly follows Dutch traditions other than the recipes that have been handed down for generations. So where does that leave me? The child of an estranged Dutchman and a strong-willed Spaniard, raised speaking both English and Spanish (often simultaneously and always interchangeably) and participating in Dutch-American and Spanish culture without really belonging to either. Because of this, I have often found it difficult to completely identify with peers, teachers and novels that are monolingual. My life has included such duality in every single aspect, and I was never really afforded the opportunity to explore that duality and my belonging in the world until my arrival at K and introduction to students, faculty and classes that were bilingual and bicultural. A large part of this journey that has been my life for the past four years has been an introduction into literature from around the world that has been written in more than one language, with cultural references from at least two different cultures. From my first-year seminar at K “The Best of Intentions” with Dr. Jan Solberg (an introduction and an awakening of consciousness to the subtle cultural differences that no one ever thinks about because they are so ingrained), to Hispanic Health and Disease taught by Professor Romero-Eshuis in which proficiency in Hispanic culture is emphasized just as much and proficiency in the Spanish language, to a class specifically focused on Chicano/a literature taught by Dr. Shanna Salinas, to my junior seminar with Dr. Babli Sinha in which we spent a lot of time with Borderlands/La Frontera and talking through our experiences while living abroad (as most of us do in the first half of our junior year), to my actual study abroad in Valparaíso, Chile where I was identified as a Spaniard next to my American peers, my classes at Kalamazoo College have allowed me to realize that I’m not alone in my existence in a convoluted space. Others have long felt torn between two or more identities and learning to manage those is a skill that requires constant adjustments. Chicano/a literature in particular has helped me manage this in particular, partly because it is generally written in two languages that I speak fluently (at times certain dialects or native words come up that I am unfamiliar with, but the basics are the same), and partly because there is a large overlap of hispanic and american cultures in the United States meaning that there is more access to these kinds of texts than other “thirdspace” texts. Because of these personal experiences, I chose to pursue a project that allows me to encompass all of these sides of me in one document, a presentation of Edward Soja’s Thirdspace theory, and an analysis of how this theory works with both Gloria Anzaldúa’s Borderlands/La Frontera and Sandra Cisneros’s Woman Hollering Creek.