The Face of Machismo Among Mexican-American Young Men 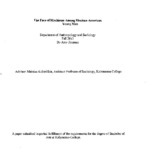 Through in-depth interviews and observations, this qualitative study analyzes the significance of machismo among contemporary young Mexican-American men from the Greater Los Angeles County. Using Practice Theory and an intersectional framework, the author addresses the following research questions: Do young Mexican men perpetuate Machismo? How do they express Machismo through their identity, behavior, and interactions? She also examines the ways young men use the concept of Machismo to negotiate relationships within a hegemonic patriarchal structure. The author argues that young Mexican-American men do not identify as machos. Rather, they describe themselves as ordinary men that subscribe to an egalitarian gender ideology. However, they do admit to adapting and engaging in machista practices in private familial spaces. They justify those practices with the need to preserve traditional gender roles within the family and fulfill their inherited responsibilities of supporting and providing financially, through their wages as well as protecting their families. Additionally when performed in public, machismo is used as a defense mechanism against the hostile inner-city environment and any other form of encountered subordination or disguised form of symbolic violence that may threaten their masculinity. Young Mexican-American men do indeed continue to perpetuate machismo because they experience a tremendous amount of pressure on behalf of their families to provide, support, and protect as heads of their households and leaders of their communities. At the same time however, they are exposed to a counter culture, the United States of America structure that rejects machismo and emphasizes gender equality and individualism and, supports the larger hegemonic masculinity characterized by white male paternalism and patriarchy. Both the mainstream U.S. and U.S.-Mexican communities serve as influential structure that shape youth's masculine conduct, identity, and ideology. Thus, she concludes that young Mexican-American men strategically acquire and appropriate ideologies of machismo, gender equality, tradition, and patriarchy. They do so in order to navigate two structures: the mainstream U.S. society and the Mexican community that are discrete yet, bounded by a hegemonic masculinity. Their habitus shapes and defines their hybrid identities as Mexican-American men.