A City Upon a Hill: Investigations in American Political Rhetoric 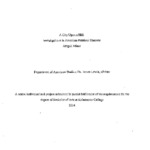 The story of the "city upon a hill" is '"the story not of how the metaphor helped make America what is its today, but the story of how America helped make the metaphor what it never was." After establishing the origins of the phrase and placing them in contexts of early American Puritanism, forms of American political speech writing and its methods will be discussed. This provides a necessary foundation for further analysis. Thus, specific uses of the "city upon a hill" in the modem era will be identified, analyzed, and categorized into two opposing political camps. The questions I aim to answer are: where did the phrase "a city on a hill" originate? How did it .enter American political discourse? Who used it, where and when? What does the phrase imply, and does it imply something different depending on the speaker and the context of the speech? Why does it still resonate centuries after its first "American" usage, and, most importantly, why is this recurring rhetorical theme significant? The roots of the phrase "a city on a hill" are biblical, though the words would not have so permeated American discourse were it not for John Winthrop, one of the founders of the Massachusetts Bay Colony. The image means something different to all individuals who employ it, as well as to everyone who hears it, and it has indeed been employed on countless occasions and by a myriad of figures over several centuries, though reliably recorded occurrences emerge at the beginning of the twentieth century. It is significant, generally, because it is a domestically and internationally understood image that has been used to describe America, and also because it proves that, even through time and across distances, public American figures have spoken and written in dialogue with one another. That is, the "city on a hill" case study is an example of how every speech, in some way, indirectly responds to something that preceded it.