Real Numbers through the Lens of Continued Fractions 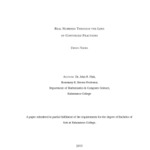