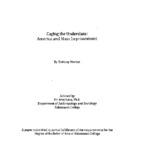 The prison population in the United States has skyrocketed at a rate no comparable nation can match. In light of this unprecedented growth, this project explores how a host of factors have contributed to immense disparities within prisons along lines of race and class particularly. The author proposes that specific practices such as race and class based profiling, and the rural imprisonment of the urban poor have led to these disparities, prison privatization and the prison industrial complex have had specific but generally small effects, and the popular image of the prisoner particularly has contributed to the vast disparities along lines of race and class. Finally, the author outlines the consequences of this growth and disparity, as well as the manner in which it continues to persist. In order to explore each of these facets, the author reviews the body of literature that has been influential to contemporary scholarship with regards to prisons and punishment. As a result, the author has found that popular conceptions of the typical criminal are used as a method of justifying the race and class-based practices and policies that lead to the imprisonment of poor minorities. Subsequently, control of the lower classes in America is effectively gained for the express purposes of those in power.