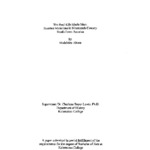 Music is a vital piece of any culture, but it took on a special significance in late nineteenth-century small-town America. During the first half of the 1800s, the new middle class formed and began to define itself relative to the upper and lower classes. As the middle class came into existence, cities began to grow and families moved to the cities in even greater numbers which made the small towns of America begin to worry about the social and economic value of their smaller communities and their status within the nation. Middle-class people in these small towns turned to numerous cultural means to affirm not only their own social status in their communities, but also to establish their communities as respectable and cultured places in the face of scorn from the big city who frequently spoke of the "The Doom of the Small-Town." Music became one of the most obvious means to accomplish this because of its ability to tie into almost every aspect of small-town life. Music was present in the church, in the home, at social gatherings, and it was not so expensive as to exclude those on the lower end of the middle class. Due to its social and economic accessibility, music allowed almost anyone who considered themselves to be middle class to achieve not only respectability, but increased social status. These small communities began to organize events and search for activities and past-times that would make them appear more• cultured, more respectable, and to elevate the members of their community. Middle-class families brought music into their homes in the form of pianos into their parlors, and brought melody into their lives through music lessons and social gatherings that revolved around music. These concerts, singing schools, and dances let the middle class assert their social superiority and made them appear cultured or "highbrow." Small towns relied heavily on itinerant musicians to bring music and, by extension, social respectability, into their communities. But, in the changing structure of American society during the mid-late 1800s, a fear and distrust of the stranger developed. The author uses a collection of letters found by her parents. The letters are written by itinerant musician John S. Wells to his wife Helen from the late 1850s through the late 1870s. These letters illuminate what the life of an itinerant musician was like, how traveling worked, how much money one could expect to make, and what types of jobs one would do. They are unique in their perspective of the daily life of a traveling musician.