The People of Peoples Temple 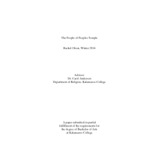 The three-decade-long history of the new religious movement known as Peoples Temple has essentially been reduced to one day: November 18, 1978. The headlines in both Time and Newsweek pegged the Temple as the “Cult of Death,” each with a cover story featuring a spread of graphic photos of the deceased. The condensed sequence of events starts with the visit by Congressman Leo Ryan and his entourage of journalists and “Concerned Relatives,” a group of family members of current Temple members who wanted to convince them to return to the U.S. The story culminates with a shoot-out at the Port Kaituma airstrip as the visitors were leaving, during which five people were killed including the congressman, three journalists, and a Temple member who decided to leave with the group. Shortly thereafter, Jones instructed everyone living in Jonestown to drink cyanide-laced Flavor-Aid in an act of “revolutionary suicide” which left more than 900 Americans dead in the remote jungle of Guyana. Those who refused to drink it were injected with the poisonous mixture. The news was shocking as it was the largest loss of life of U.S. citizens due to a non-natural disaster up until September 11, 2001. Unfortunately, this narrow view of events, this singular vision of Peoples Temple on that fateful day in November has muted the voices of both the Jonestown deceased and discounted the stories of living survivors. The morbid fascination with how Jonestown ended has aided in the public’s distancing themselves from Temple members’ humanity. Throughout this study, I will argue that there were three main motivations for joining the Temple which remained constant regardless of time period or location: racial integration, divine healings, and social outreach programs. When the Temple relocated to Redwood Valley, they began to attract a young, white, educated crowd, who were drawn to the countercultural elements as well as the opportunity to find meaningful jobs and leadership roles in the Temple. In San Francisco and Los Angeles, Jones’ sermons began to resemble the traditional Black worship style and incorporated political elements like the Black Panthers, which in turn attracted an African American demographic.